skip to main | skip to sidebar

A Journal of a Racecar Driver

After several month of putting the car together...I finally got to race...But ....there was a lot of good, a tough bad and a little ugly.  :) 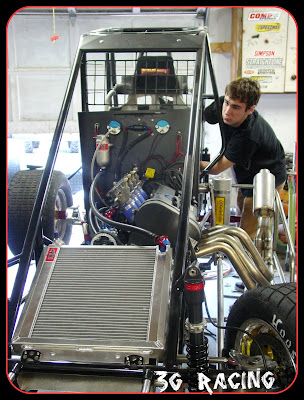 Sooo Here the story....I got back Thursday afternoon from a collage trip with my school (by the way I'm not planning on going and I'm sick of people telling me that I need too...like you'll be a loser if you don't go to collage....I might just have to prove them wrong)!!!  Anyway... Dad had been working hard to get the car put together but it was taking longer than he had hoped and we still needed to dinno it....That never happened!

After staying up until 2:00 in the morning on Friday, the car still wouldn't start...we went to bed tired and frustrated!!  Dad got up early Saturday morning and I woke up to one of my favorite sounds...The roar of the engine.....So that was good!!!  (Apparently it was a computer problem). 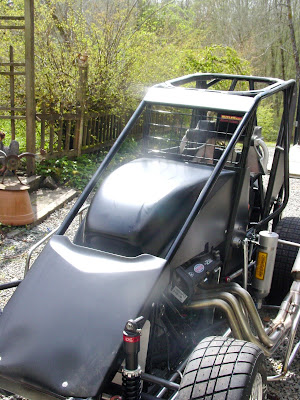 We painted the car flat black and it looks great...Puget Sound Auto Body has been very good to us!!! :)  After lots of debate we finally deiced on the decals (The 3G and flames) but it took us to long, Sign Mart couldn't get them done in time...but it will be worth the wait....Anyway we put my numbers on with masking tape...that's where the Ugly comes in......but it got the job done.  (Sorry I don't have any pictures of the numbers...believe me they were nothing to see). 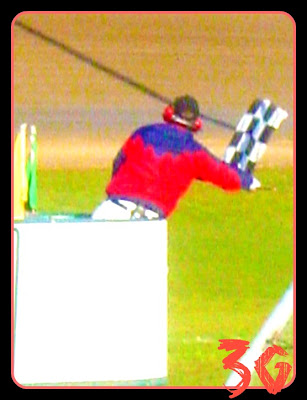 ﻿Now comes the Bad...Very Bad...My car wouldn't start...They even pushed me half way around the track with the truck...still wouldn't go....
And that was it....I was done for the night...never getting to race the final race.
Anyway thats my weekend...Whats yours?

The first race of the season at Grays Harbor Raceway got canceled due to rain (Not a surprise..We live in Washington) ...So Drew and I headed off to the Super Cross at Quest Field in Seattle. 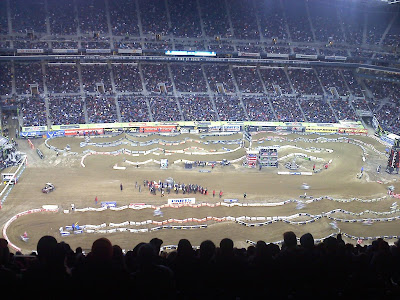 After missing the ferry we.... finally got there but not in time to get into the pits....Our seats were high, but the view was good and the racing was great!! James Stewart won his heat, the dash and the main...I'm not sure that's proper terminology..It's what we would have called them at the car races.

﻿
﻿
﻿ ﻿
Anyway when we got up the next morning Drew and I did some work on our track and then spent the afternoon riding.....Mom cam out to take some pictures....believe it or not the sun was shinning..(Haven't seen that in a while here)..... 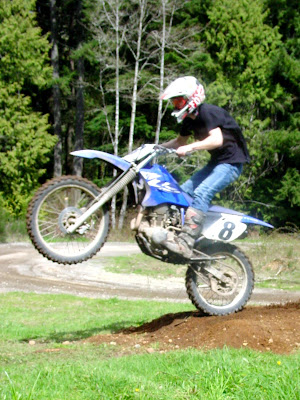 We plan on making the track bigger yet but that will probably be this summer... 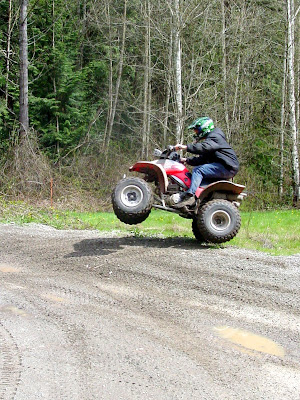 That was my weekend and my Sunday in my City....Oh ya...we did have an incident with a couple coyotes...but that another story...﻿

Hey did you know Charlie Kimball has Type 1 Diabetes???   Neither did I...My sister has it...and I know maybe not first hand but second hand.......it's a tough thing to live with!!!  She has to check her blood sugar all day and our mom gets up twice in the night to check it.  She now has an insulin pump that makes things a little easier but she has to change her sight every 3 days and sometimes her sight really hurts.

Check out his web page at Charlie Kimball﻿

This year I plan on giving 10% of my winnings to JDRF for Diabetes research....
Find your place to make a difference!
Garret...3G Racing
Posted by Garret J...3G Racing at 5:42 PM No comments:

Sunday in my City...Gettin ready for a New Season


Right now most every weekend is spent getting the new Midget ready for the 2011 season. We picked the used chassie up for a kid in California who has moved on to racing Sprint Cars...Sounds Like Fun!!! 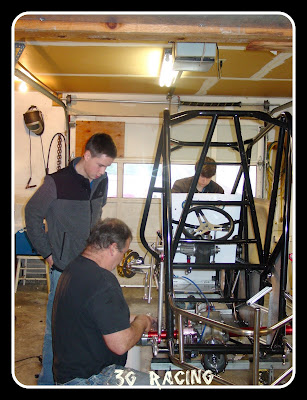 Dad ordered a new Ford focus engine (That's why theses cars are often called the "Ford Focus Midgets") and we plan on dropping it in soon....There's a lot of work still to be done!!! 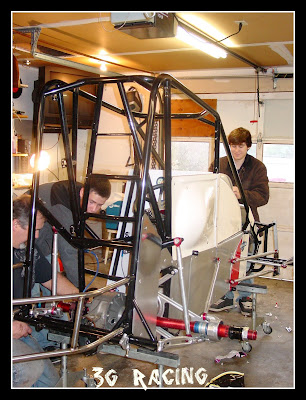 I plan on painting it flat black...but still haven't figured out what to do the decals in...kind of liking the idea of shinny black with a red and silver pin stripes around them....probably the same 3G design as my Micro Sprint.... 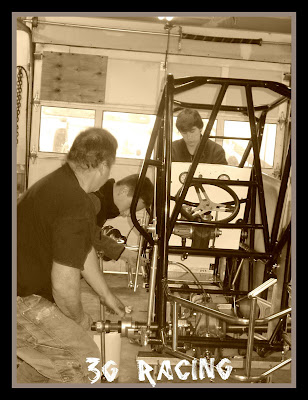 I'm tiring to get a full sponsorship this year...but haven't figured out how to go about it...Would love some suggestions!!

Last year we started a brand new tradition with out good friends the Hansens...BLOWING UP our GINGERBREAD HOUSES at midnight......gingerbread has never been so fun!!! 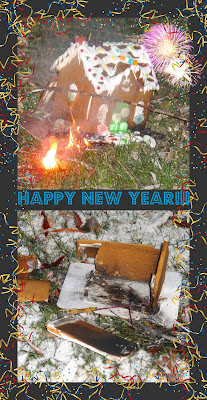 Racing at Skagit or Allison Flips Her Car...

Last weekend while my Cousin... 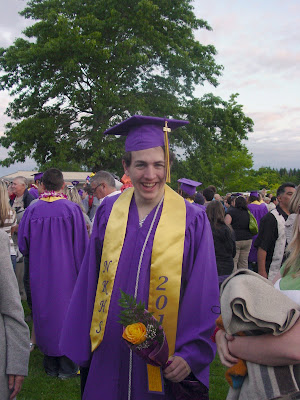 And my sister had her last day of school ... 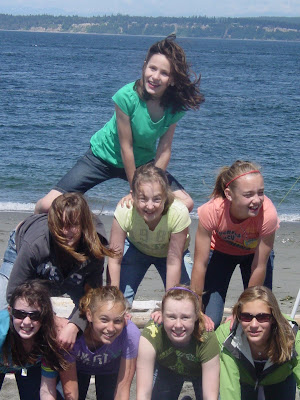 I went to Skagit Speedway for the Dirt Cup!
(Sorry guys, but it was my first opportunity to race Skagit)
The Dirt Cup was Crazy Wild, in every way possible!!!
From the fans to the drivers...We even had a team from Australia. :D
We raced both Friday and Saturday nights and on the last race of the last night Allison flipped her car. Check out the video:
http://www.nwracingvideos.com/aj/aj.html
I thought you might enjoy that...I'm in the Blue car...finished 4th.... Allison walked away and is just fine!
Posted by Garret J...3G Racing at 10:35 PM No comments:

For Flashback Friday were going back to the Summer of 2006 ... to The Dirt Grands, at Elma WA. 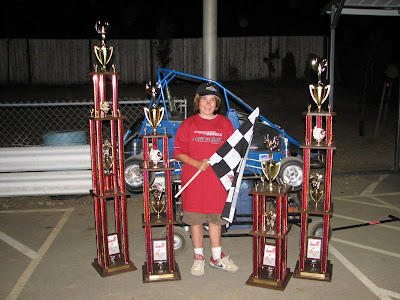 (My car, my A-Main trophy's and myself)
The Dirt Grands are a National event held once a year for Quarter Midgets...We had drivers from, as far away as Florida!
***********
I raced 4 different cars in 4 different classes (They were all Quarter Midgets) and I made it into the A-Main in all of them...looking back that was a pretty big deal in itself! 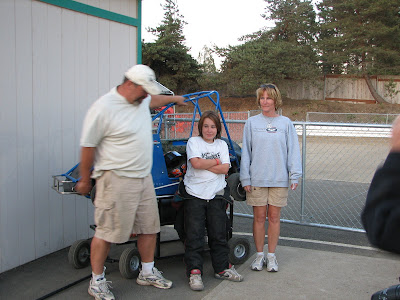 (Mom Dad and I after winning the "World Formal" race.)
BUT......
I won, I won the world formal race...the cool thing is...it was the fist year they had a World Formal class....It still kind of blows me away!! 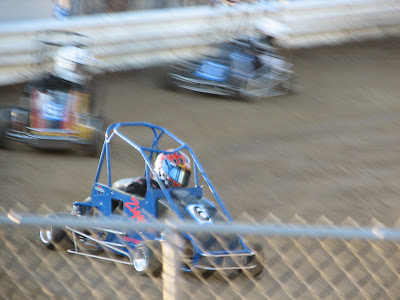 (Me in my World Formal)

The truth is I had planned on...or should I say counted on winning the Half class (For those of you who don't know the different classes are the types of motors in the cars.)
Anyway I was moving up from the back ... passing cars one lap at a time ..when a car came down on me...hit me hard and that was the end...I was out of the race. ...... I don't think I have ever been so MAD!!!
I went back to my car trailer and sat inside, crying and hitting my elbow hard against the trailer wall.......That was all I could do... 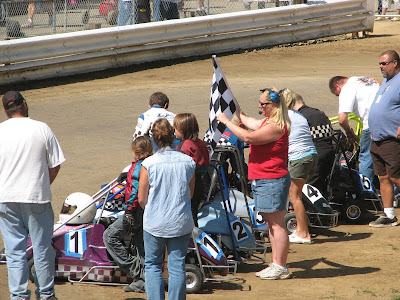 (Introducing the driver before the race)

Mom found me there and insisted I go back out and race my last race....(Which of course was the World Formal)...I refused...I just wanted to give up and be left alone....My blood was boiling inside of me and my emotions were out of control!!
Why bother...I'll just get hit again!
Well you know how Moms are...I did go out and race that last race and as they say:

"THE REST IS HISTORY!"

That is how I became the first ever 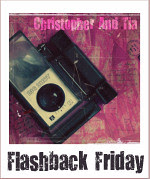 Garret J...3G Racing
I am 16 years old and in the 10Th grade and have been racing cars since I was 8....I love to race!!! I started out racing Quarter Midgets and won a National Championship when I was 12. I am now racing a Ford Focus Midget...So look for me at both Skagit Speedway and Greys Harbor Raceway along with other Dirt tracks around Washington and Oregon!! My goal is to make a living out of racing and I am looking for sponsorship to help reach it. I wouldn't be able to do this with out the support of Family and friends, so to all of you THANK YOU Very Much!! 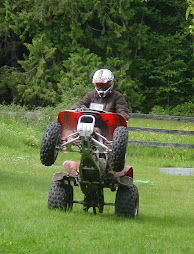 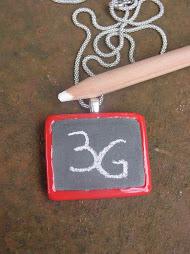 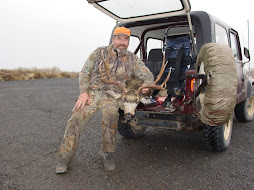 This is a LINK to our favorite Bow shop...Check it out and mention my name! 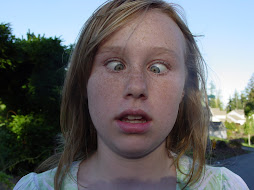